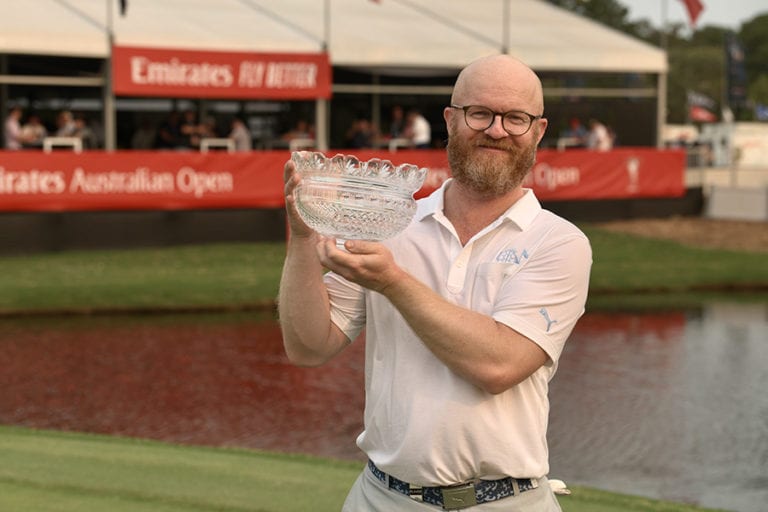 For all the drama of the closing stages of the Emirates Australian Open there was equal intrigue in the finish to the second Australian All Abilities Championship Presented by ISPS Handa at The Australian Golf Club in Sydney.

In fact, the finish to the two tournaments was intertwined in a way that would have been unimaginable even three years ago as the AAAC was forced into sudden death for the first time.

Defending champion Johan Kammerstad of Sweden and Canada’s Kurtis Barkley – the last player into the field – finished the 72 holes tied at 23-over 236.

With extra holes needed to decide the outcome, the pair returned to the 18th tee and waited for the final group of the Emirates Australian Open to tee off before hitting off immediately behind them.

With huge galleries watching on as Matt Jones holed out for a one-shot victory over Louis Oosthuizen, Kammerstad and Barkley waited nervously back in the fairway to hit their third shots.

“Just a dream come true right there. To play in a professional event, TV cameras everywhere, people everywhere.…you couldn’t even see the grass there were so many people.”

Barkley’s third to the par-5 finished 50 feet from the hole while Kammerstad hit his approach to about 15 feet.

“I didn’t want to leave it short,” Barkley said of his first putt which slipped six feet long.

“And then the one coming back I misread it by about half a ball. I hit it right where I wanted to but it was just the wrong line.

“To be honest I thought he had made his birdie putt before that. When he hit it I could see it was right on line and it came up just about half a ball short.

“I was actually hoping it would go in because how good would that have been, for someone to win it with a birdie in front of that crowd?”
Both players started the final round trailing American Chad Pfeifer and Ireland’s Brendan Lawlor by four and three shots respectively and teed off several groups ahead.

Getting to the clubhouse more than an hour before their opponents, they faced a long wait before it was confirmed they would be heading back to the 18th tee.

“We had something to eat then went back to the range and hit some balls and did some putting,” Kammerstad said.

“It was important just do something instead of sitting on a chair and waiting.”

Both hit good drives and good lay-up shots but it was Kammerstad’s third that proved the difference.

“It was nerve-wracking,” he said of hitting in front of such a big crowd. “But it worked out.”

The on course competition and stunning finish was important for several reasons according to Golf Australia Inclusion Manager Christian Hamilton.
After a successful debut in 2018 he said he couldn’t be happier with how the 2019 competition had unfolded.

“I’m thrilled for the two guys in the playoff and what a show they put on,” he said.

“But it has just been a fantastic week at so many levels. The players were better this year and the crowds were better as well.

“And what this has done for the sport going forward, with making the case to be in the Paralympics and just moving the whole thing forward….I honestly couldn’t have asked for more.”