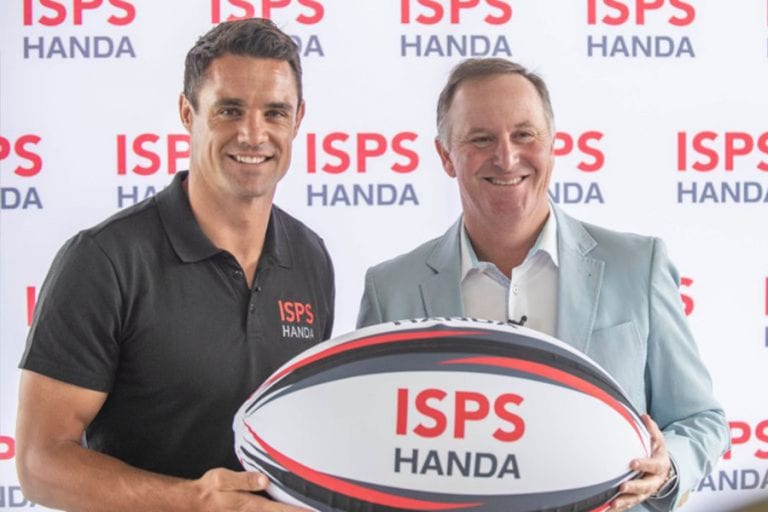 As ambassador for the International Sports Promotion Society (ISPS Handa) Carter will assist in addressing social issues that prevent sporting participation in New Zealand, the Pacific Islands and Japan. Carter’s recent relocation to Japan will enable him to have more of an influential role in sports development in communities closer to home, and to give back to the sport that made him an international sporting star.

“I want to help kids live their dreams. I’ve been so fortunate to have been able to live mine through rugby and if I can work with ISPS Handa to help kids throughout New Zealand, Japan and the Pacific live theirs then that would be really special to me” Carter said.

ISPS Handa is a global organisation, founded by Dr Haruhisa Handa, and committed to developing sporting, cultural and humanitarian programmes around the world. ISPS Executive Director of International Affairs Midori Miyazaki was delighted to welcome the rugby superstar.

“Dr Handa isso excited to have such an esteemed New Zealander representing ISPS Handa to inspire and unite people and communities through the power of sport.” Miyazaki said.

Over the next three years ISPS Handa will work with Carter to deliver balls and equipment to communities where sporting resource is scarce. At Wednesday’s official announcement Sir John and Carter went head to head in a golf vs rugby tournament. Each time they hit or kicked a ball through the posts another 300 balls were donated to communities in need.

“We reached a total of 3,800 balls, which will go a long way to enabling kids to participate in team sports. We want to continue to help communities develop and what better way to do that than with one of New Zealand’s most loved sporting stars”.

Sir John Key has been a patron and global ambassador for ISPS Handa since 2016 and was instrumental in forging the relationship with between Carter and ISPS Handa. Sir John’s role for the organisation is to break down educational and cultural barriers through sport, and he identified Carter as the perfect partner in enabling social progress in New Zealand and the Pacific Islands, through sport.

“It’s a privilege to be involved with the valuable work that Dr Handa and his organisations are doing around the world and to have Dan alongside us now is fantastic. I’ve personally seen the impact he’s had on youth in New Zealand and we want to continue to build on that” Key said.

ISPS Handa is a significant contributor in the development of sport in New Zealand and invests in various sporting bodies in New Zealand, including NZ Football and the Halberg Foundation. Globally, the organisation supports the Invictus Games, Sentebale Royal Salute Polo Cup, World Sports Values Summit for Peace and Development and various international golfing tournaments, with an emphasis on blind and disabled golf.