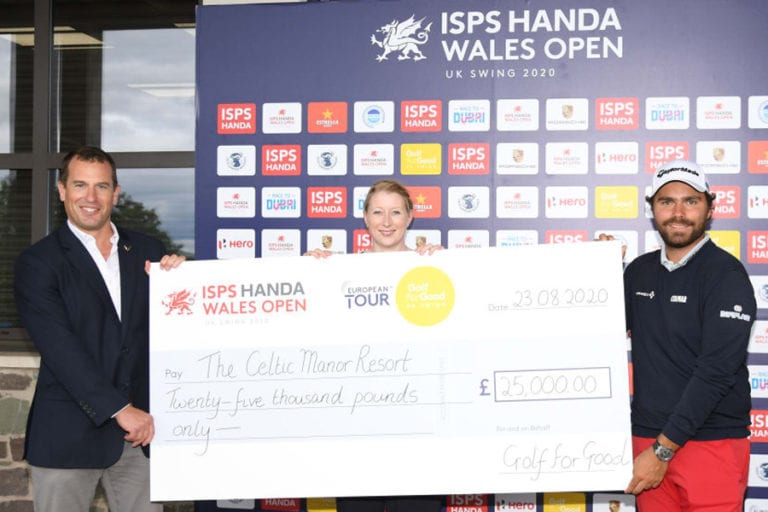 The European Tour’s #GolfforGood initiative, a narrative which underpins the six-tournament UK Swing and will continue throughout the remainder of the 2020 Race to Dubai, continued to give back to charities and local communities through a two-week stint at The Celtic Manor Resort in Wales.

For the first time in the European Tour’s history, back-to-back events took place at the same venue as both the Celtic Classic and ISPS HANDA Wales Open were competed over the Twenty Ten Course at the 2010 Ryder Cup venue close to Newport in south Wales.

The European Tour donated £50,000 to The Celtic Manor Resort and ISPS HANDA, to be distributed to charities of their choice, while thousands of golf balls were donated to two local junior academies and two local heroes through the Covid-19 pandemic were also rewarded by the European Tour for their efforts.

Both based in Newport, St David’s Hospice Care provides hospice care to over 2000 people with cancer and other life-threatening illnesses, while Raven House Trust provides food and furniture for people in need throughout the old county of Gwent and beyond.

ISPS HANDA, founded by Dr Haruhisa Handa in 2006 to further the transformative power of sport across the globe, with an emphasis on para-sport and blind sport, donated its £25,000 to Invictus Games – of which it is an Official Partner.

The 2020 Invictus Games was due to take place at The Hague but has been postponed to 2021 due to the Covid-19 pandemic. The 65-strong team of wounded, injured and sick (WIS) military personnel and veterans selected to represent the UK included eight athletes from Wales.

Ian Edwards, Chief Executive of the Celtic Manor Resort, said: “We have been delighted to host two events in the European Tour’s UK Swing over the Twenty Ten Course and one of the most rewarding aspects of that has been the opportunity to make a difference in the local community through the #GolfforGood campaign.

“We have chosen two very worthy charities based in Newport in St David’s Hospice Care and Raven House Trust. They are charities which have been so important to the lives of so many, especially during these difficult times globally, and we thank the European Tour for helping to support the community of south Wales.”

Dr Haruhisa Handa, founder and Chairman of ISPS HANDA, said: “At ISPS HANDA, we aim to inspire through the power of sport by creating hope and breaking down barriers. The world has been starved of sport for the past six months, and we are pleased and proud to be able to help support its return. We are thrilled to be given the opportunity by the European Tour to donate to Invictus Games, which shares this vision to inspire through the power of sport. We look forward to the #GolfforGood initiative at the ISPS HANDA UK Championship.”

The Heroes Initiative also continued to reward local heroes of the Covid-19 pandemic with unique prizes to thank them for their efforts.

The winner during the Celtic Classic week was Dewi Frelford, a local postman who doubled his rounds during the pandemic, walking up to 20 miles per day – twice his usual daily distance.The second winner of the fortnight, during the ISPS HANDA Wales Open, will be announced on Monday evening.