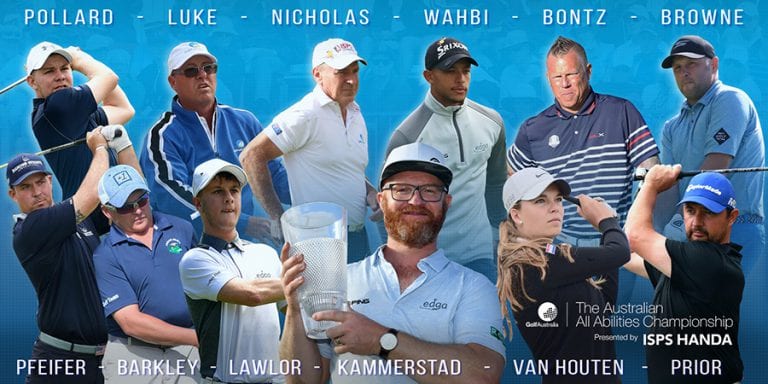 The Australian All Abilities Championship continues to gather momentum as ISPS Handa renews its support as its 2019 presenting partner.

The inaugural AAAC played out to rave reviews in Sydney last November and, more importantly, broke huge ground for all-abilities golfers around the world. The 54-hole AAAC’s second staging will again be held concurrently with the Australian Open at The Australian Golf Club from 6-8 December.

Golf Australia national inclusion manager Christian Hamilton was excited that its already broad impact will expand again through the reach of ISPS Handa.

“We are thrilled that we are bringing the vision of Dr Handa to life through our long-standing partnership with ISPS Handa,” Hamilton said.

“Dr Handa has invested in the development of blind and disabled golf since 1988, so it’s great that we get to highlight that investment through this pinnacle event for the world to see.

“ISPS Handa has been with Golf Australia since the start, developing the ISPS Handa Academy program with the PGA of Australia.

“That program, now in its fourth year, has trained more than 130 PGA professionals around the country, providing people with disability a clear pathway either back into the game, or to pick it up for the first time.

“It’s through that agency and the impact of global events such as the AAAC that our messages of inclusivity and that golf is a game for life can be seen and heard.”

The 12-person AAAC field will feature defending champion Johan Kammerstad, of Sweden, and Daphne Van Houten, of the Netherlands, the first woman in 104 editions to be on-course during an Australian Open.

The field is selected based on world rankings and will feature four Australian competitors. The first round will be played on Friday towards the end of the Australian Open field, but the final two rounds are played in groups interspersed among the final handful of groups – and off the same tees – as the national championship.