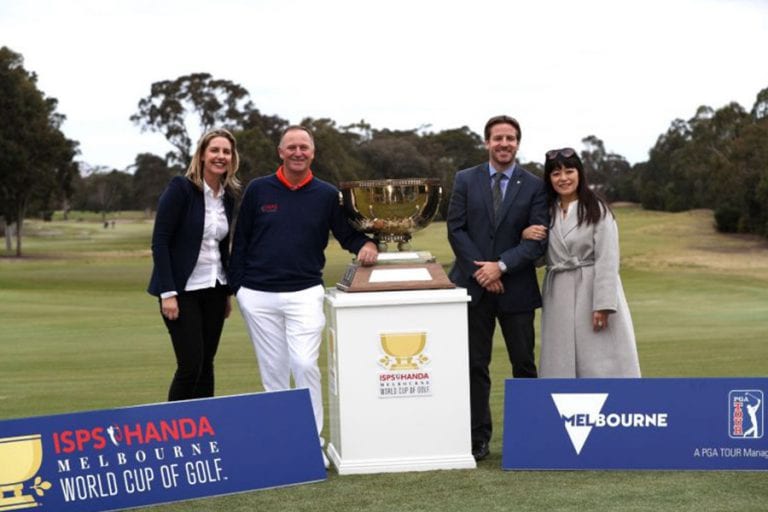 Now only 100 days away, the ISPS HANDA Melbourne World Cup of Golf will feature two-man teams from the top 28 nations based on the Official World Golf Ranking. The 59th staging of the event will see the 56-player field vie for the largest prize-money purse in Australian golf, with $US7 million on offer.

“ISPS is very pleased to once again sponsor this important international team event,” said Dr. Handa, who serves as the organization’s chairman.

“The World Cup of Golf has such a rich history and ISPS has been supporting golf on a global basis for a number of years. At ISPS, we strongly believe in the ‘power of sport’ and its ability to break down barriers, create hope and inspire people around the world. We consider The ISPS HANDA Melbourne World Cup of Golf to be an ideal platform and partnership where we are able to activate the vision we share with all those involved. We had wonderful experiences in Melbourne in 2013 and 2016 and look forward to another great event at The Metropolitan Golf Club.”

“On behalf of the International Federation of PGA Tours, we offer our gratitude to one of the world’s most gracious philanthropists, Dr. Haruhisa Handa, for his support of the 2018 ISPS HANDA Melbourne World Cup of Golf,” said Ty Votaw, President, International for the PGA TOUR. “To be hosted by The Metropolitan Golf Club in the Melbourne Sandbelt with a tremendous partner in ISPS HANDA provides enormous momentum for this team competition with a rich history dating back to 1953.”

Established in 2006, ISPS HANDA is widely recognized for its global efforts to promote blind and disabled golf. It also has been sponsoring amateur and professional tournaments worldwide, as well as a stable of professional golf ambassadors. Dr. Handa created the Japanese Blind Golf Association in 1988 and was the driving force behind the formation of the International Blind Golf Association (IBGA) in 1998. The IBGA was established to coordinate the efforts of blind golf associations around the world and now is the governing and sanctioning body for international blind golf events.

ISPS HANDA has been a leading voice in gathering support for the inclusion of disabled golf in the Paralympics, an initiative that is supported by the PGA TOUR and International Federation of PGA Tours. To continue to raise awareness of this initiative, ISPS HANDA will host Blind and Disabled golf exhibitions at the 2018 ISPS HANDA Melbourne World Cup of Golf, as well as the 2019 Presidents Cup and the 2019 and 2020 Sentry Tournament of Champions.

As part of ISPS HANDA’s wider relationship with the PGA TOUR and the International Federation of PGA Tours, they will also become a ‘Charity Partner of the Presidents Cup’ and the ‘Official Promoter of Disabled Golf of the Sentry Tournament of Champions.’

The 2018 ISPS HANDA Melbourne World Cup of Golf will mark the third-consecutive playing of the event in the Melbourne Sandbelt region. In 2016, Danes Søren Kjeldsen and Thorbjørn Olesen shot a final-round 66 in foursomes at Kingston Heath to win Denmark’s first World Cup of Golf title by four strokes over the United States, China and France. Aussies Adam Scott and Jason Day were victorious at The Royal Melbourne Golf Club in 2013.

Tickets and travel packages for the 2018 ISPS HANDA Melbourne World Cup of Golf are now on sale at WorldCupofGolf.com.

Three and five-night Melbourne World Cup of Golf tournament travel packages are now available, including accommodation, tickets, souvenir merchandise and coaches to transport you to the event in comfort and style. You can also extend your stay in Melbourne and explore further afield with the flexibility to drive, chip and putt to your hearts content.

In Australia, the tournament will be broadcast on the Nine network with five hours of live competition broadcast each day as well as a one-hour highlights program for use on Nine TV, digital, and/or any video on demand platforms.