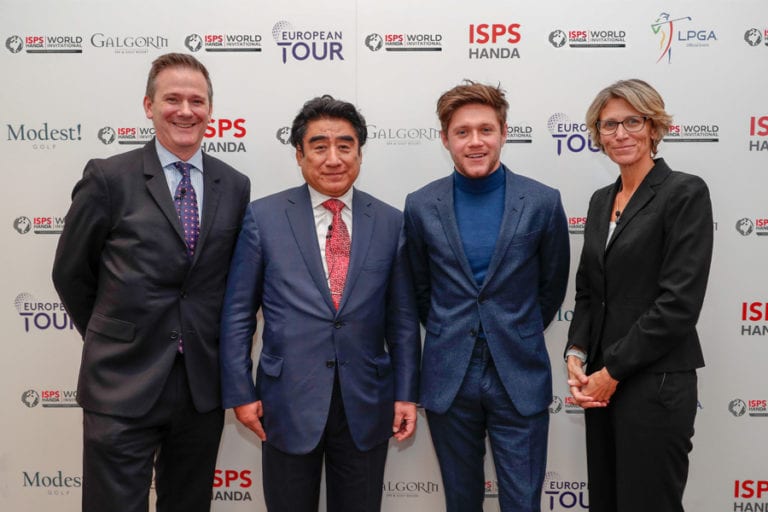 The ISPS HANDA Vic Open’s world-first format of having men and women compete at the same time, on the same course, for equal prizemoney will break new ground in the Northern Hemisphere with the rapidly growing ISPS HANDA World Invitational Presented by Modest! Golf to be played in Northern Ireland in July.

Previously a European Challenge Tour event, the 2021 ISPS HANDA World Invitational Presented by Modest! Golf will be the first time an event of this format has been tri-sanctioned by the European Tour, LPGA and Ladies European Tour.

Supported by Event Patron, ISPS HANDA Ambassador and music superstar Niall Horan, the ground-breaking event will offer a prize purse of US $2.35 million split evenly between the men’s and women’s events at Galgorm Castle and Massereene Golf Clubs from July 29 to August 1.
“We wanted to be the first in Europe to do it and we can have all of the ideas that we want but ISPS HANDA still had to take us up on it,” says Horan who also owns Modest! Golf Management.

The inaugural ISPS HANDA World Invitational Presented by Modest! Golf in 2019 was the first time the Vic Open-inspired format had been adopted in the Northern Hemisphere and this year’s event will be boosted tremendously by Horan’s involvement.

The 27-year-old has 41.1 million followers on Twitter and 26.6 million on Instagram, which he says could have an enormous impact on golf’s growth particularly amongst women who, in Australia, comprise about 20 per cent of club golfers.

“A lot of those [followers] would be young females,” the former One Direction band member says.

“It’s about getting young girls to pick up a club, give it a go. You might hit 50 bad ones but if the 51st one is a good one, you’ll probably come back. If you can get a small percentage of my followers in, that’s how I’m going to help.

“If we can grow the female game, we grow the game in general and I think it’s probably as simple as that.”

LPGA Chief Tournament Business Officer Ricki Lasky says the format championed by the ISPS HANDA Vic Open – which was jointly sanctioned by the LPGA and European Tour in 2020 – also provides players with a rare opportunity to connect with their male counterparts.

“Not only do our players love the format and playing alongside the guys, what’s really interesting is what happens off the golf course on the range when they hit balls alongside one another,” Lasky says.

“They love each other’s swings and when they’re sitting in player dining, [they’re] talking about families and things other than golf and creating some bonds that weren’t there before.”

“The ISPS HANDA Vic Open in 2019 and 2020 was another illustration of the visionary that Dr Handa is,” says European Tour Chief Executive Keith Pelley.
A total of 288 men and women will tee it up in the ISPS HANDA World Invitational Presented by Modest! Golf which will form part of the European Tour’s 2021 UK Swing, taking in tournaments in Wales, Northern Ireland, Scotland and England.

Horan says ISPS HANDA’s backing of joint men’s and women’s events sends a strong message to the golfing world that inclusive playing formats are vital to the game’s continued growth.

“Only two or three years ago, the ISPS HANDA Vic Open was the only one, now it’s our one and then hopefully people start to look at this and then go, ‘there’s no reason why we can’t do this’,” he says.

“I really hope that some of the key stakeholders in golf are inspired by tournaments such as the ISPS HANDA World Invitational and look to invest where they can in truly unique events which celebrate equality and inclusivity.”

“Especially for these young girls now when we have these mixed tournaments for equal prizemoney, it can only be inspiring. For a long time, this wasn’t the case.”

“It’s about getting in, moving the needle, getting eyes on this and [for] the young girls and our juniors, it will be an eye-opening experience for them, and they can be like, ‘well, I can be like that girl there swinging it’.”

The ISPS HANDA World Invitational Presented by Modest! Golf also offers the UK a much-anticipated dose of live sport after enduring months of lockdown amid the coronavirus.

“At the start of lockdown, I actually thought about running to Australia and spending my whole lockdown in Australia,” Horan says.

“I was talking to my friend in Australia yesterday, he was like, ‘if you want to go and tour anywhere, you can play stadiums here in Australia’.

“My cousins lived in Australia for a while and I spent a lot of time down there so to get back to Australia playing gigs and playing golf is what I dream about on a daily basis.”

A traditional 72-hole stroke play format will be in place at the ISPS HANDA World Invitational Presented by Modest! Golf with men and women competing at Galgorm Castle and Massereene over the first two days.

A halfway cut reduces the field to the top 60 professionals, including ties, in the men’s and women’s draws.

The third round will take place at Galgorm Castle before a further 54-hole cut takes place with the top 35 and ties from the men’s and women’s draws advancing to the final round on Sunday.

“Dr Handa and ISPS HANDA have been supporting blind and disabled golf for over 30 years,” Phillips says.

“The belief of the power of sport to be able to change lives and break down barriers and make a real difference has been the underlying principle that Dr Handa has very much stood by those three decades.”