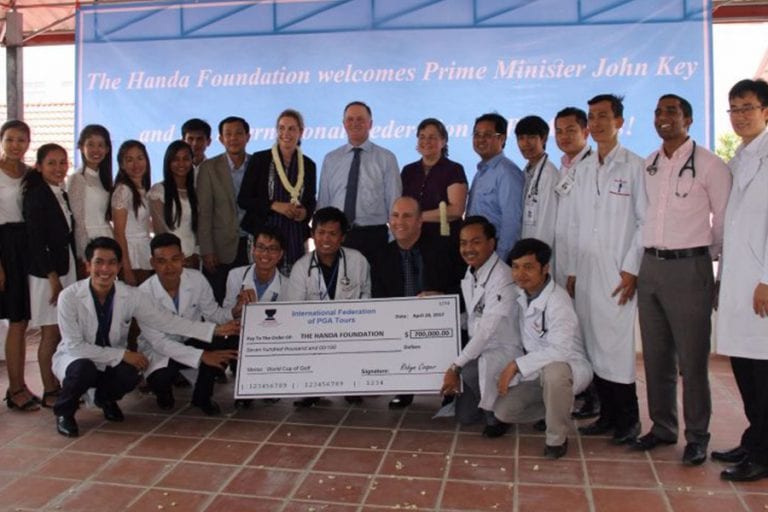 “On behalf of the International Federation of PGA Tours, it is an honor to not only make this contribution to The Handa Foundation, but to also be here and see, first hand, the meaningful impact that this foundation is having,” said Tournament Director Robyn Cooper. “The motto of the ISPS Handa World Cup of Golf has been to promote international goodwill through golf. Today, making this donation and being here to see its impact, is a fantastic example of how this event is delivering on this vision which was created more than 60 years ago.”

According to ISPS Handa patron John Key, “It is a privilege, as the former Prime Minister of New Zealand, to once again be back in Cambodia. I am excited to experience firsthand the tremendous contribution that’s been made by The Handa Foundation to improve the lives of so many people in this country.”

In 2012 Dr. Haruhisa Handa founded a new International NGO called The Handa Foundation, which has been registered in the United States, the United Kingdom and the Kingdom of Cambodia. It is a non-religious, non-political, not-for-profit organization with the mission of building sustainable hospitals, schools, farms and sports centers in Southeast Asia. It receives funding from generous individuals and organizations, and is driven by Dr. Handa’s visionary leadership. More information about our mission and programs is available at www.thehandafoundation.org.

Two of the foundation’s largest programs are the Handa Medical Center in Battambang, Cambodia and the 109-Bed Emergency Hospital located adjacent to it. The hospital is the largest of its kind in the country and is located in a region that remains heavily effected by landmines left from decades of war. Today the hospital provides care for more than 1,200 traffic and landmine accident victims each month, and since it opened in 1998 it has treated approximately half of the country’s 50,000 landmine survivors. In addition to generous donations, the foundation also benefits from partnerships with Stanford University in the US, Curtin University in Australia, the London School of Hygiene and Tropical Medicine in the UK, and a joint farming project with USAID.

According to Mr. Kevin O’Brien, Country Director of The Handa Foundation, “I could not be more excited about this donation from the International Federation of PGA Tours. The game of golf has the ability to bring people together and harness their good will in amazing ways. I wish everyone who was a part of the World Cup in Melbourne could have been here today to celebrate this incredibly generous donation.”

Denmark won the 2016 ISPS HANDA World Cup of Golf for the first time in the 58th staging of the event, as Søren Kjeldsen and Thorbjørn Olesen claimed a thrilling four-shot victory at Kingston Heath Golf Club. The Danes had been a dominant force all week; with a stunning round of 60 in the fourballs in the second round helping them carry a four-shot lead into a final day where they played the same format.

In addition to the donation, the tournament also provided financial assistance to its two local charity partners in Australia, the Starlight Foundation and Monash Children’s Hospital.