The event formerly known as the NI Open, the most successful and best attended event on the European Challenge Tour, has been transformed into a new global event for men and women professionals. This progressive move was made possible when ISPS HANDA and long-time supporters of the NI Open, Modest! Golf, engaged with organisers and bought into the long-term vision for this unique event.

“We are very pleased to become involved in this exciting new World Invitational event for both men and women professionals,” said Dr Haruhisa Handa, Chairman of International Sports Promotion Society (ISPS) HANDA. “We recognise the work and efforts made by Modest! Golf, the European Challenge Tour and host venue Galgorm over the years and look forward to playing a part in the next chapter.”

“The company ethos of ISPS HANDA has always been to try and break down barriers and present opportunities for everyone through sport, especially those disadvantaged. Sport has the ability to bring people and communities together and we welcome the opportunity to work closely with all the partners for this exciting new event.”

ISPS HANDA has an international reputation for supporting golf around the world and has “collaborated with almost every major golf tour globally”. The new World Invitational will continue to attract the best players from the European Challenge Tour and will also invite the leading women professionals from the US LPGA Tour, Ladies European Tour plus players from Asia, Japan and Australia.

It means household names like Northern Ireland’s Michael Hoey, Australia’s Richard Green and many others will get the chance to tee it up alongside stars of the women’s game plus homegrown talent like Leona and Lisa Maguire and Stephanie Meadow.

“We got into golf with the aim to help and develop the next generation of player. By supporting a tournament like this exciting new World Invitational, we are going to bring that goal to fruition,” explains Modest! Golf’s Niall Horan.

“The entire Modest! team are delighted to be partnering with ISPS HANDA, a wonderful organisation who are synonymous with promoting the game around the world and helping to bring people together through sport.

“ISPS HANDA reach out to all areas of society as evidenced through their drive and support for blind and disabled golf. In this part of the world we are aware more than most about the importance of creating a lasting legacy. By working alongside ISPS HANDA we can help deliver something very special through this exciting new tournament,” added Horan.

The World Invitational is a multi-year sponsorship deal with ISPS HANDA and a first of its kind for Europe. It presents a unique opportunity for the sporting public to witness the best players from the men’s and women’s games. Massereene Golf Club will also act as host venue before the weekend rounds conclude at Galgorm in the $500,000 tournament that carries equal prize money.

The planned format for the World Invitational will have in the region of 300 players competing over the two venues before two cuts, one after the second round and another after the third round.

All eyes will soon be on the action at Royal Portrush when the Open Championship returns to Ireland for the first time in almost 70 years from July 18-21. Just four weeks later golf fans will have the opportunity to witness more world class golf at this unique World Invitational.

The week-long festival of golf will include live music concerts at the historic Galgorm estate with many other family attractions such as the dedicated golf village; family area; coaching zones and Junior event. Tickets have always been extremely popular for golf at Galgorm.
Discounted advance ticket purchases can be made at worldinvitational.golf where spectators can take advantage of the ‘early bird offers’ to enjoy this showpiece sporting event.

European Tour Chief Executive Officer Keith Pelley said: “As golf’s global Tour, our core values are innovation and inclusivity and this new tournament fits perfectly into both of those genres. We are so pleased to have another innovative format on the Challenge Tour’s schedule following the success of the Jordan Mixed Open earlier this year.

“It’s fantastic to see these pioneering events becoming more common on the global golfing calendar and we hope they continue to grow with the support of sponsors and broadcasters.

“We have seen the success of the ISPS Handa Vic Open in Australia – which was won by Challenge Tour graduate David Law – and it is really exciting to have a tournament of the same format taking place in Northern Ireland this year.

“We must thank Dr Handa, Niall Horan and Modest! Golf, and Gary Henry for their hard work in organising this tournament and I am excited to see the action unfold at Galgorm in August.”

Henry has been the driving force behind tournament golf at Galgorm over the years and welcomes today’s news. “We are pleased such a key player like ISPS HANDA is the new title sponsor and has shown confidence in our vision to introduce ladies to a tournament that was already hugely successful on the European Challenge Tour.” said Henry. 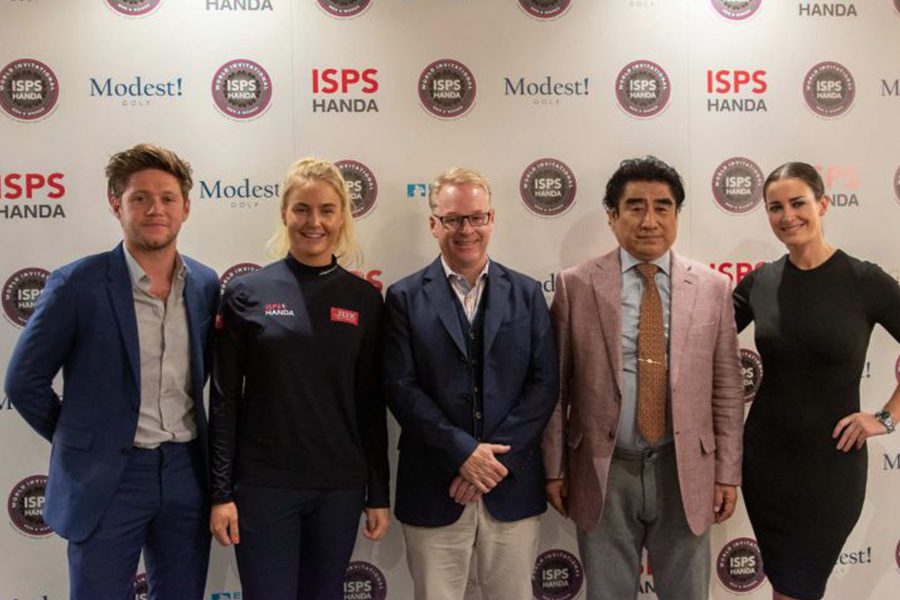 “We must also give special thanks to the European Challenge Tour for their continued support over the years and going forward for what promises to be an exciting new chapter for tournament golf at Galgorm.

“Through ISPS HANDA and our existing partners Modest! Golf! we have a vision to develop the World Invitational into a lasting event with genuine global appeal and to create a legacy for all communities and sports fans across Ireland.

“We must thank all our government partners; Tourism NI; Mid & East Antrim Borough Council; Antrim & Newtownabbey Borough Council; Sport NI and Tourism Ireland for their continued support. The benefits to the local economy and increased bed nights is significant. The World Invitational on our doorstep will be broadcast internationally and will help attract golf tourists to Ireland and the region while creating and sustaining local jobs.”

(Note: The Ulster Strokeplay Championship will also take place at Galgorm and Massereene on May 27-28. This year the GUI/ILGU (Golfing Union of Ireland/Irish Ladies Golf Union) sanctioned event has the added incentive for the leading elite amateur players to book their place in the new ISPS HANDA World Invitational).