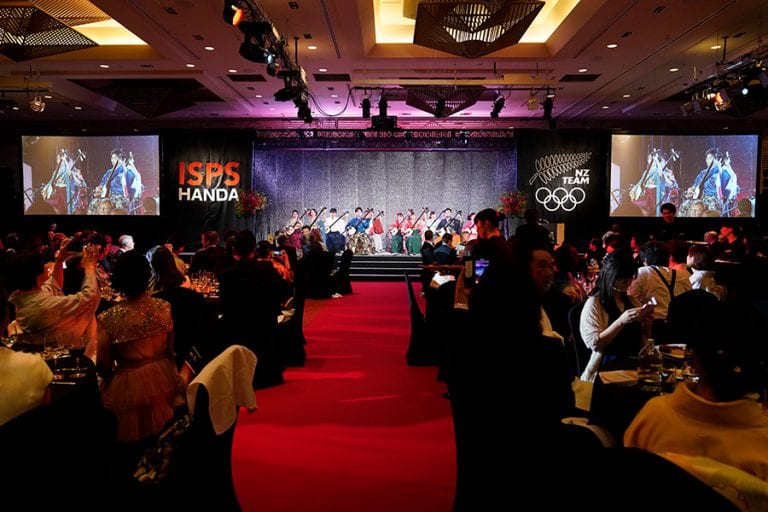 “I would like to thank the people of Japan for your exceptional hosting of the Rugby World Cup and your enthusiastic support for the upcoming Tokyo Olympic Games. These events will give rise to a whole new generation of sporting role models, in Japan and around the world.”

He also acknowledged Founder of ISPS Handa, Dr Handa and others who provide philanthropic support to sport.

“Sport, at all levels, provides us with the opportunity to lead more fulfilling lives.”

“New sports, a focus on youth and greater gender equality are all positive developments which will make this one of the best ever Olympic Games,” she said.

“We continue to see a lot of progress across venue and operational delivery,” he said of the 2020 Olympic Games.

“The recent test events have been successful for the New Zealand Team and provided a real opportunity to get into the performance planning detail. The fantastic delivery and level of support here in Tokyo around New Zealand and the Rugby World Cup has confirmed what a wonderful host nation Japan is.”

“I’m truly excited to see Japan in the spotlight once again when the Olympic Games get underway in July next year,” he said.

“More than half of the world’s population will follow the action at Tokyo 2020. It will be a unique moment to showcase the best of Japan’s rich history and traditions, cutting-edge innovation and, of course, the love and passion for sport that the Japanese share with New Zealand and other countries.”

Carter spoke about how both the Olympic Games and the Rugby World Cup factored into his decision to move to Japan.

“With the Rugby World Cup happening here in Japan and then the Olympic Games happening next year, there’s no better country to be living and playing sport in at the moment, so I’m really grateful that my body is just holding together and I’m still able to play,” he said.

Richie told the crowd he expects Tokyo 2020 to be a fantastic Games and reflected on his own experiences as a spectator at the Rio 2016 Olympic Games.

“I was lucky enough to watch some gold medals New Zealand won in the rowing and kayaking. That was pretty cool, standing there with a whole lot of Kiwis and seeing that happen was very special,” he said.

Tokyo 2020 will see the best athletes from around the globe compete as the equivalent of 30 World Championship events take place over an intense 17 days of competition.

New Zealand expects to send its biggest ever Olympic team to the Tokyo 2020 with around 220 athletes expected to wear the silver fern in both traditional and new sports.

The New Zealand Team is continuing preparations for Tokyo 2020 with athletes competing around the world to meet qualification standards and gain selection.

The Tokyo Gala and partnership with ISPS Handa will help get New Zealand’s athletes to the Games and inspire young people through sport.