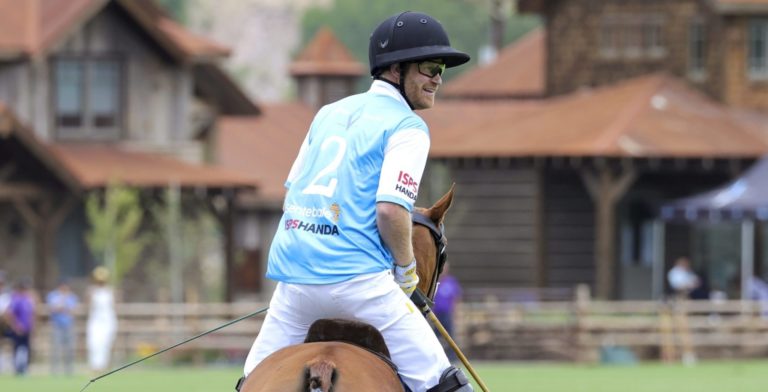 Prince Harry, the Duke of Sussex, plays polo to raise funds for Sentebale in Aspen, USA

On the 25th August 2022, Prince Harry, The Duke of Sussex, Co-Founding Patron of Sentebale, returned to the stunning grounds of Aspen Valley Polo Club in Colorado to play in the 2022 Sentebale ISPS Handa Polo Cup. Each year, the Polo Cup raises awareness and funds to support Sentebale’s work with children and young people in Southern Africa whose lives have been affected by extreme poverty, inequality, HIV/AIDS and recently COVID-19.

The Sentebale Team claimed victory in a fast-paced round robin tournament featuring Royal Salute and U.S. Polo Assn. Their win was the result of a spectacular team effort which saw every player scoring at least one goal. The team was captained by the charity’s ambassador and Argentine polo player, Nacho Figueras, who played alongside The Duke of Sussex, Grant Ganzi, and Steve Cox.

The Sentebale ISPS Handa Polo Cup is the annual flagship fundraising event, which over the last decade has raised around £10million to support Sentebale’s work in providing vulnerable children and young people in Lesotho and Botswana with access to vital health services, care and support, and skills to be self-sufficient and thrive.

Around 200 guests, including former All Black rugby player and ISPS Handa Ambassador Dan Carter were treated to an afternoon of polo at the foothills of the majestic Mount Sopris before dining at The St. Regis Aspen Resort. Carter delivered a speech to guests followed by Prince Harry, The Duke of Sussex and Nacho Figueras. Prior to the conclusion of the Duke’s speech, Prince Harry introduced a music written and produced by three young artists from Lesotho commissioned by Sentebale titled, “We Are the Future”. The story is grounded in the agency of young people, who are the changemakers at the centre of solutions that they know work best for their communities. Over the years, Sentebale’s ways of working have evolved, yet the focus has remained the same –to respond to the needs of the most vulnerable children and young people. The charity has learnt that by listening to young people and working in a way that they lead, have agency, and are empowered is the key to driving sustainable outcomes for communities and future generations.

Prince Harry, The Duke of Sussex, Co-Founding Patron of Sentebale said, “At Sentebale we strive to break generational cycles of trauma and stigma every day. By educating and empowering young people to know their status and to know they can live long, healthy lives while on medication, we aim to end HIV once and for all.”

Midori Miyazaki, International Executive Director of ISPS Handa said, “On behalf of my Chairman Dr Haruhisa Handa, our gratitude goes to the Sentebale team, the Aspen Valley Polo Club, the players, and all the other sponsors and spectators who made this event possible. It’s been a true platform to showcase how the “power of sport” can bring can bring us together, to make a difference in the lives of the children in Lesotho and Botswana who need your support as they overcome the challenges that come with HIV and AIDS. Our thanks to ISPS Ambassador and Rugby Legend Dan Carter, for representing us and for being the incredible voice of the “power of sport” making a positive difference in the world. To The Duke of Sussex, he is, as ever, the ultimate inspiration and we salute his unwavering commitment in being the light of hope to those who are suffering around the world, and we look forward to benefiting from his vision and insight for many years to come.

Lesotho and Botswana, have the second and fourth highest HIV infection rates globally. The road to ending AIDS as a global health threat by 2030 continues to experience gains and setbacks. In Botswana, rates of adult HIV prevalence have been halved in the last 20 years and, in what the World Health Organization has called a “remarkable achievement”, the country is on its way to becoming the first African country to eliminate mother-to-child transmissions of HIV. In 2021, Lesotho met the UNAIDS targets of over 90% of people living with HIV knowing their status, over 90% enrolling on treatment and over 90% of those on treatment with viral load supressed. Botswana and Lesotho show that the virtual elimination of HIV is within sight and is possible. Yet for the past two-and-a-half years, young people and their families having to navigate two global health pandemics – _COVID-19 and HIV/AIDS. It has compounded many of the social challenges facing children and young people and exacerbated existing inequalities. Adolescent girls and young women continue to be exposed to risky behaviours and practices in efforts to provide security and a livelihood, there has been a rise in early and unintended pregnancies and gender-based violence cases across Lesotho and Botswana, and Sentebale youth advocates have reported a decline in mental health and wellbeing amongst their peers due to increasing levels of unemployment and a lack of youth-friendly information and services available.

The funds raised from this year’s Sentebale ISPS Handa Polo Cup are essential to ensuring the progress made in recent years is maintained. Sentebale’s holistic package of support for vulnerable children and young people focusses on four key areas: strengthening the social and emotional wellbeing of those living with or affected by HIV; working with communities to provide young people with access to health and social services; driving youth advocacy to improve health, education, and social protection; and building individuals skills and livelihoods so they are more resilient, self-confident and empowered members of their communities. This layered approach is supporting positive health outcomes, improving access to education and services, and is nurturing children and young people to thrive.