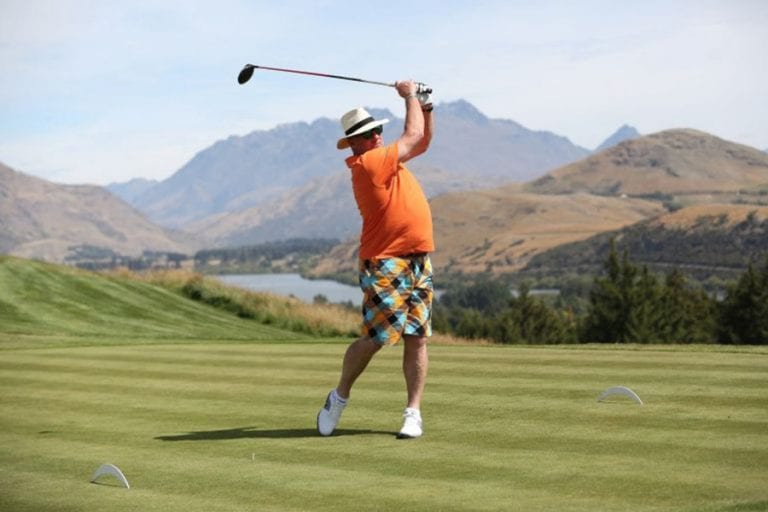 Renowned celebrity chef Josh Emett leaves the kitchen to turn up the heat on the golf course, while TV personality and singer Kerri-Anne Kennerley – one of Australia’s most seasoned entertainment hosts – is out to show just how much she loves a good game of golf.

The 14 celebrity amateurs will play as part of the tournament’s popular and successful Pro-Am format.

Considering golf isn’t their ‘first’ sport, the celebrities boast some pretty handy handicaps, including cricket great Ricky Ponting who could go toe-to-toe with the pro’s with an impressive scratch handicap.

The 125kg super-strong Walsh, who took up playing golf with his shot put coach in their ‘down time’, plays off a very handy 11 handicap, while the likes of McCullum, Border, Fleming, Warne, Botham, Archibald and Wilson are all ten-or-below handicappers.

Golf obviously runs in the blood for former AB Grant Fox, father of top Kiwi hopeful Ryan Fox, as he plays off a very solid four handicap, while Sir Russell Coutts, who loves the game so much he’s built a private nine-hole golf course at his home above Arrowtown, is on a tidy 14.

Japanese baseball star Kuwata is no stranger to a slightly larger white ball, and plays off an impressive six handicap, while Kennerley and Emett play off 16 and 15 respectively.

Tournament director Michael Glading says the amateur and celebrity format of the tournament is unique in that it boasts world class golfers playing for $1m in prizemoney, and also 140 amateur players who get to play alongside the professionals.

“Adding sporting and other celebrities really adds an extra dimension to our unique event, and spectators love spotting those famous faces in amongst the pros. The entertainment factor is huge, enjoyed by die-hard golf fans and those along for a great day out.

“I suspect there will be more than a few people keen to see how far Tom can hit the ball off the tee, for example!”

The ISPS Handa New Zealand Open is a NZ$1 million Tier One event on the PGA Tour of Australasia, in partnership with the Japan Golf Tour. The 2017 event will be played in Queenstown at Millbrook Resort and The Hills on 9-12 March.

For further information, latest updates and to book tickets go to www.nzopen.co.nz