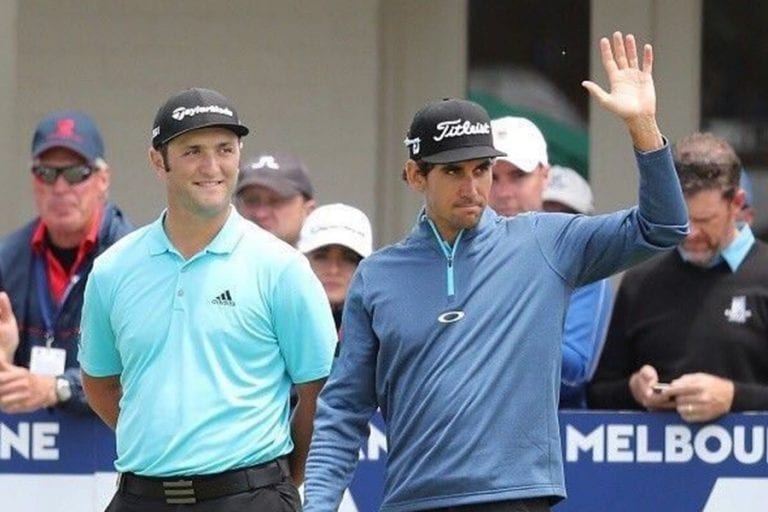 Spain’s Rafa Cabrera-Bello was the only player to give thanks to the stiff south-westerly wind that buffeted the field in the ISPS HANDA World Cup of Golf’s opening round on Thursday.

He threw back his head in a mix of relief and delight when a birdie attempt on the 18th green hovered on the right lip and then dropped into the cup to propel his team into the lead.

Cabrera-Bello and teammate Jon Rahm had a three-under round of 69 to edge one stroke ahead of France, China and the U.S. after the foursomes competition at Kingston Heath.

“It looked like I couldn’t miss and then all of a sudden it could really miss and I don’t know how it came back. It looked like it was going to miss right and something up there …. the wind helped,” Cabrera-Bello said.

That was the only positive comment on the cold wind that tormented the 56 players with club selection on approach shots to the quickening greens.

The teams are hoping for calmer conditions for Friday’s fourball second round that is more tournament-familiar than the first round’s alternate shot format.

While U.S. pair Rickie Fowler and Jimmy Walker lamented being away from home for Thanksgiving, winning the World Cup is firmly in their sights.

“We didn’t come down here to play for second. That (win) would make the trip worthwhile,” Fowler said.

Walker dominated the American highlights package, nailing a 15-meter birdie putt on the fifth and then holing a bunker shot at the 13th that started a trio of back nine birdies.

But the PGA Championship winner praised Fowler’s scrambling exploits as equally important to compile the two-under 70.
“He putted really good, made some great clutch (par) putts that really saved us in the middle of the day,” Walker said.

“It played tough, anything under par was a good score. It really was a battle.”

On Thanksgiving Day, when a majority of Americans spend time cooking, eating, watching football and taking time to be thankful, Rickie Fowler and Jimmy Walker were thankful for each other as partners after both pointed to key shots made by the other as part of their two under par opening round.

“I’m thankful to have a stud partner,” said Walker, the 2016 U.S. PGA Championship winner. “Rickie putted really well and made some clutch putts beginning of the round. Putting really saved us today.”

While Fowler and Walker have been friends off the course for quite awhile, they have also developed good chemistry on the course having partnered for this year’s victorious U.S. Ryder Cup Team. Playing foursomes is not a format that the best players in the world put into competition often, so to have that experience was important for the U.S. World Cup Team.

“I think we got everything out of it I think we could have,” Walker said. “Rickie hit it great, hit some good shots. It was an all-around effort.”

“It wasn’t playing easy out there. You know, we’re going to miss shots in alternate shot, it’s just the way it is,” Fowler said.

“I think we did a good job picking each other up when needed. Jimmy hit some great shots, drove the ball well and made some putts when he needed to.”

At one under the card the English team of Chris Wood and Andy Sullivan share fifth place alongside the Italian duo of Francesco Molinari and Matteo Manassero.

A shot further back are Team Sweden, represented by Alex Noren and David Lingmerth; Team Denmark, made up of Søren Kjeldsen and Thorbjørn Olesen; and Team Ireland, represented by Shane Lowry and Graeme McDowell.

Shooting a two over 74 to be tied for 14th after the first round was not the way Team Australia had hoped to start their ISPS HANDA World Cup of Golf title defence.

Adam Scott and Marc Leishman struggled to find momentum in the challenging conditions.

“Obviously it’s a little disappointing. They were tough conditions and definitely not what we wanted for the first round,” said Leishman.

Scott added: “I think it was just the wind. It’s very tough to gauge exactly what’s going on out there when it’s blustery.

“We had no momentum today but in these conditions, it’s about as hard as it gets playing foursomes in blustery conditions around a tricky course.”

The second round of the ISPS HANDA World Cup of Golf, which will be played in the fourball format, gets underway at 8:28 a.m., with the last group due out on course at 11:30 a.m.