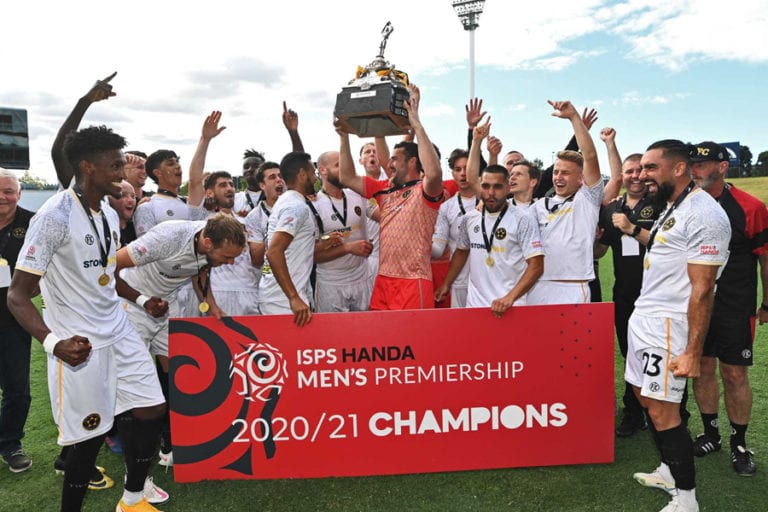 If the two sides’ previous encounters this season had been marked by Auckland City FC taking the early advantage, Team Wellington were determined to flip the script third time around and took the early lead.

A 14th minute penalty for a foul on Jack-Henry Sinclair, with referee Matthew Conger waving away Auckland City FC protests to point to the spot. If recent form is anything to go by, there was only one man to take the penalty – yet golden boot winner-elect Hamish Watson was denied by a strong hand from City keeper Browne. Partner in crime Andy Bevin was on hand, however, to pounce on the rebound and give Team Wellington the lead.

City pushed for a response down the left hand flank, with moves often started by Alfie Rogers, and continued with strong approach play variously from Mohamed Awad and Futsal White Dylan Manickum saw the Navy Blues fashion chances, only for the Team Wellington defence to stand resolute.

While Team Wellington’s opener was born of sheer determination to set the agenda for the afternoon, their second was Second goal from TW was stunning – a flowing move started and ended by the effervescent Jack-Henry Sinclair, playing in Sam Mason-Smith, who backheeled to Bevin who slipped in Rory McKeown for Sinclair to finish the move with his back to goal for a backheel finish himself. 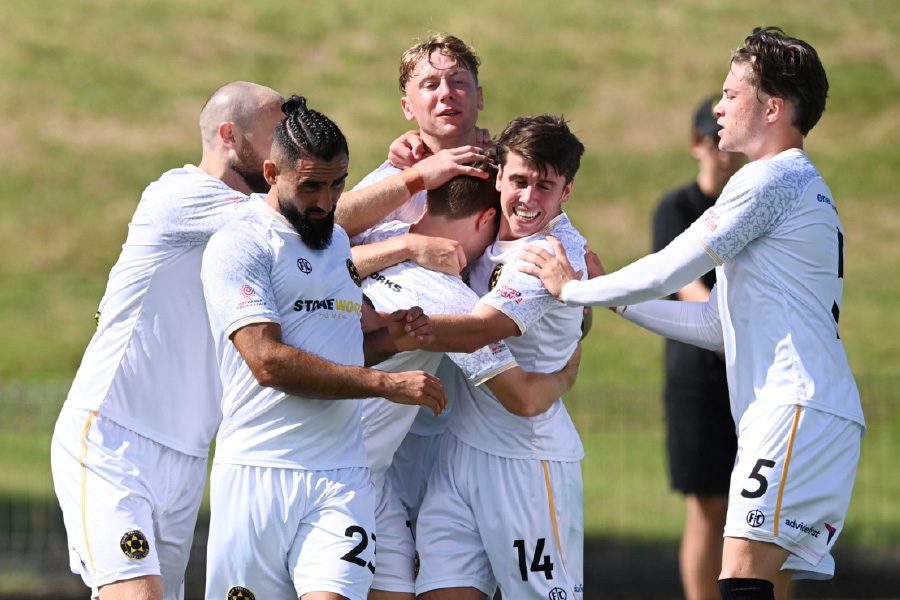 This gave Auckland City the nudge they needed to get themselves on the scoresheet – their first of the afternoon also a penalty. Argentinan stalwart Emiliano Tade was bundled over by compatriot Mario Barcia, and emphatically burying his shot in the bottom left hand corner to put the pressure back on Team Wellington.

City had the opportunity to equalize at the 40-minute mark after a well-worked free kick routine, saw Tade slide to Manickum whose shot was blocked by Jones, only for Yousif Al-Kalisy’s follow up to eventually somehow spin out for a throw in.

Not that it mattered as Awad slipped in a ball intended for Al-Kalisy and finished by a pouncing Manickum, as he picked the pocket of Justin Gulley to level the scores and wrench the psychological advantage back to Auckland City as the teams went into half time with the scores locked at 2-2.

Team Wellington head coach Scott Hales spoke before the game of the importance of Golden Boot winner Hamish Watson’s rich vein of form imbuing his team with confidence and form of their own, amply demonstrated by his involvement in his side’s third goal.

His presence in the box was key to Team Wellington’s bright start of the second half. After a cool interplay with Bevin in the Auckland City FC penalty area saw possession briefly won back by the Navy Blues, Watson’s determined press won Team Wellington the ball back and he slipped a back heel to Ollie Whyte who thumped his shot into the top left hand corner past Browne.

Andy Bevin doubled his tally for the afternoon after heading McKeown’s floated free kick beyond Browne in the 69th minute to bookend the scoresheet and secure the Steve Sumner Trophy for today’s man of the match.

It proved to be the hammer blow for Auckland City FC’s title defence. Not even a late penalty to City, after a push in the back sent Awad flying in the penalty area, could pull the game back to the incumbents as Tade’s Panenka careered off the crossbar, and his tap in rebound was disallowed as no other player touched the ball.