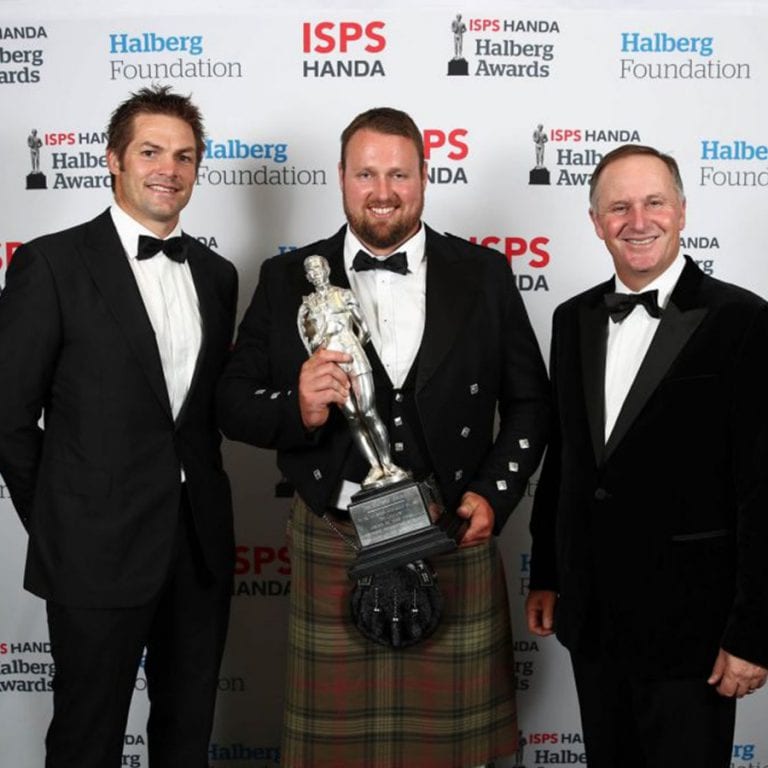 Tom Walsh has claimed New Zealand’s top sports honours for 2018 at the 56th ISPS Handa Halberg Awards during a ceremony at Spark Arena in Auckland tonight.

The shot putter won the ISPS Handa Sportsman of the Year for the second consecutive year before being presented the supreme Halberg Award by Rob Waddell.

Walsh was recognised for his outstanding achievements in 2018 including victories at the World Indoor Championship, Commonwealth Games and Diamond League events. He edged out freeskier Nico Porteous and motor racers Scott McLaughlin and Scott Dixon to claim the ISPS Handa Sportsman category.

Ten awards and a Sports Hall of Fame inductee were presented during the live ceremony to honour and celebrate New Zealand sporting achievement in 2018. Hosted by the Halberg Foundation, the event was also the major fundraiser for the charity set up by Olympic athletics champion Sir Murray Halberg (ONZ).

The Black Ferns Sevens claimed the ISPS Handa Team of the Year honours. The women’s team, who won the Sevens Rugby World Cup and gold at the Commonwealth Games collected the hotly contested award ahead of the NZ Football Under 17 Women Team, NZ Women’s Kayaking Team, Vantage Black Sticks Women and All Blacks Sevens.

Anna Leat’s successful penalty shootout against Japan, leading New Zealand into the semifinal of the Fifa Under-17 Women’s World Cup was chosen as New Zealand’s Favourite Sporting Moment of 2018 – the only award voted on by the public.

The annual Awards is the major fundraiser for the Halberg Foundation, the charity set up by Olympic athletics champion Sir Murray Halberg (ONZ), which aims to enhance the lives of physically disabled young New Zealanders by enabling them to participate in sport and recreation.

The Halberg Foundation has a team of Advisers around the country who connect physically disabled young people to sport and recreation opportunities, deliver an inclusion training course on adapting physical activity and assist clubs, schools and organisations to provide inclusive events and programmes. The Foundation also hosts the Halberg Games – a national three-day sports competition for physically disabled young people.

The full list of winners and finalists for the 56th ISPS Handa Halberg Awards: