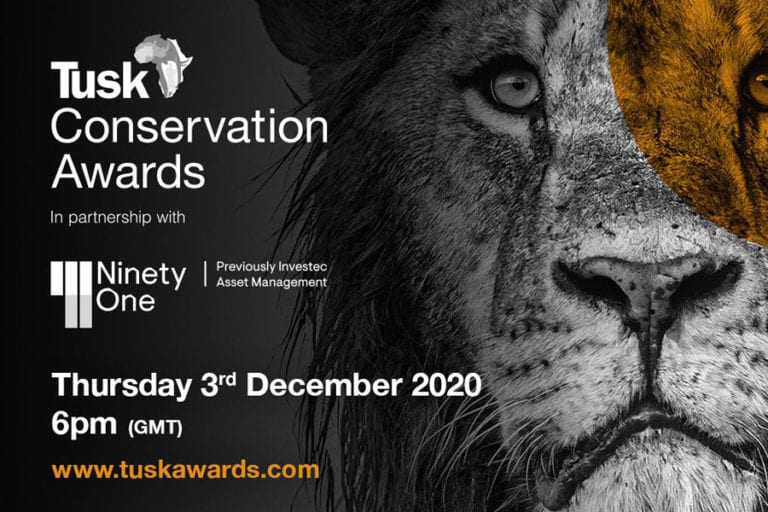 This year, the prestigious Tusk Conservation Awards, launched with Prince William in 2013 to celebrate the work of leading conservationists in Africa, will take place virtually on Thursday 3rd December at 6.00pm GMT. This year the event, in partnership with Ninety One, will be broadcast at www.tuskawards.com and on Tusk’s social media channels via Facebook Live and Instagram Live.

Today, Tusk is announcing a significant increase in the value of the awards thanks to the generous commitment of £1m over 5 years from The Nick Maughan Foundation.  Recognised at the virtual ceremony, this funding will more than double the conservation grants given to the winners and finalists dedicated to safeguarding the continent’s wildlife and habitat.

This year has been exceptionally difficult for the extraordinary men and women living on the frontline of African conservation. Drastic cuts in salaries and resources due to the devastating economic impact of Covid-19 threaten to undo their years of conservation work across Africa.

Announcing the shortlist for the 2020 Tusk Award for Conservation in Africa, Charlie Mayhew, CEO of Tusk said, “We are immensely grateful to Ninety One for their continued partnership and thrilled to announce the invaluable additional support from The Nick Maughan Foundation. As the future of the natural world is brought into even sharper focus, it is fantastic that the recipients of our awards can continue their vital work thanks to this much needed boost to grant funding. I am very pleased today to reveal the three exceptional finalists for this year’s Tusk Award.”

The shortlist for the prestigious Tusk Award for Conservation in Africa in partnership with Land Rover are:

The winner of this award will be announced at the virtual ceremony. The event will also broadcast the presentation of the annual Prince William Award for Conservation, sponsored by headline partner Ninety One and the Tusk Wildlife Ranger Award, sponsored by The Nick Maughan Foundation.

Hendrik du Toit, CEO of Ninety One, said: “The awards not only acknowledge the contribution made by exceptional individuals towards conservation in Africa, but also aim to raise global awareness of the significant and immediate challenges faced by the natural world. COVID-19 has only added to the urgency of conservation efforts. We congratulate this year’s finalists and are hugely proud to partner with the Tusk Trust creating a live virtual event that can be accessed in all corners of the world.”

Nick Maughan, founder, said, “The Nick Maughan Foundation is delighted to support the Tusk Conservation Awards. The Foundation is committed to advancing best-in-class conservation initiatives – safeguarding the biodiversity of our precious environment is needed now more than ever. The NMF congratulates the excellent shortlisted finalists and looks forward to the awards ceremony next month.”

The three winners will each receive a trophy specially crafted by Patrick Mavros. Additional support for the 2020 Tusk Conservation Awards has been received from ISPS Handa, Mantis Group, Fortemus Films and Maia Films, EJF Philanthropies and Shelton Fleming.

Celebrating its 30th anniversary this year, Tusk has been working since 1990 to build a sustainable future for the African continent and its wildlife. Since its formation Tusk has raised over $100m for a wide range of projects, which not only work to protect wildlife, particularly endangered species, but also help to alleviate poverty through sustainable development and education amongst rural communities living alongside wildlife.

HRH The Duke of Cambridge became Royal Patron of Tusk Trust in December 2005 and he has actively supported the charity’s work both privately and publicly on many occasions. The Tusk Conservation Awards, which were devised with the personal input of The Duke, were first held at the Royal Society, London, in September 2013.

The recipient of The Prince William Award for Conservation in Africa, sponsored by Ninety One is a lifetime achievement award, given to a distinguished individual for their outstanding dedication and exceptional continued contribution to conservation in Africa. The award comes with a Tusk grant of £100,000 over three years.

The Tusk Award for Conservation in Africa, sponsored by Land Rover, is for an individual who is judged to be an emerging leading conservationist, in recognition of their outstanding success shown in their chosen field. This award comes with a Tusk grant of £75,000 over three years.

The Tusk Wildlife Ranger Award gives international recognition to the dedication and commitment of an individual who works in the field to protect Africa’s wildlife.  The award is being sponsored by the Nick Maughan Foundation.  The winner receives a Tusk grant of £30,000 over three years.

Ninety One is an independent, active global investment manager dedicated to delivering compelling outcomes for its clients, managing more than £118.0 billion in assets (as at 30.06.20). Ninety One is a proud partner of Tusk since co-creating the Tusk Conservation Awards in 2013.

Established in South Africa in 1991, as Investec Asset Management, the firm started offering domestic investments in an emerging market. In 2020, almost three decades of organic growth later, the firm demerged from Investec Group and became Ninety One. Today the firm offers distinctive active strategies across equities, fixed income, multi-asset and alternatives to institutions, advisors and individual investors around the world.

The Nick Maughan Foundation was established in 2020 to further a range of philanthropic initiatives in education, the environment and civic support schemes for disenfranchised communities. The Foundation supports wildlife conservation projects both in the United Kingdom and worldwide.

Land Rover is proud to support the Tusk Awards, not only to help recognise and raise awareness of the contribution of these leading conservationists, but to provide resources that empower communities and individuals in wildlife conservation programmes across Africa.