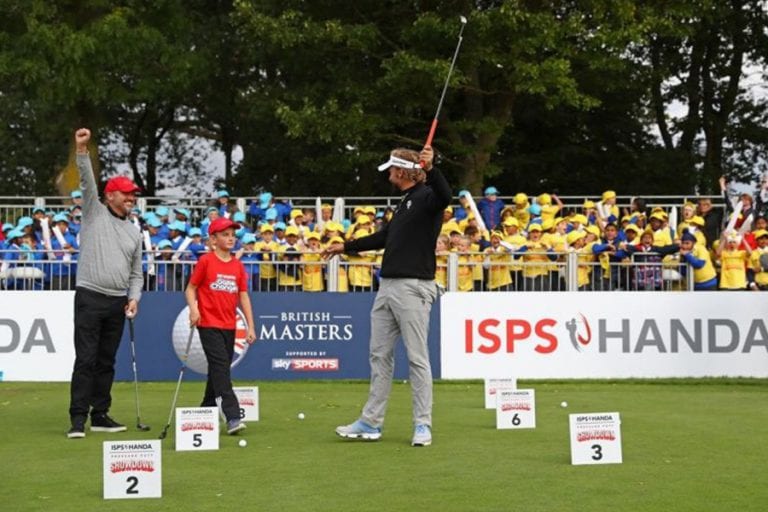 The stars of the future once again stole the show as the ISPS Handa Pressure Putt Showdown returned with a new format on the eve of the British Masters supported by Sky Sports.

Young golf fanatic Aston Anderson was called upon as a ‘Game Changer’ by Joost Luiten and his partner, snooker player Stephen Hendry, and he held his nerve to hole a crucial putt in a tense shoot-out final against Søren Kjeldsen and Gianfranco Zola. Luiten’s team went on to win and pick up a prize of £10,000 which will be split between the title sponsor’ chosen charity and the Golf Foundation, the official charity of the British Masters.

Aston said: “I really enjoyed it, it was one of the most fun moments of my life. I play a lot of golf, and yeah, I would say I’m quite a good putter.”

Luiten was impressed by his young team mate’s contribution. The Dutchman, who is part of the field at British Masters supported by Sky Sports on Thursday, said: “He made a couple of nice putts and he kept us in the game a couple of times. That’s why we have him on our team. It’s a team effort and you need everybody to perform.

“It was a great atmosphere and so good to have the young kids here to cheer us on and also compete themselves. These kids are the future of the game so it’s great to have them here.”

The ISPS Handa Pressure Putt Showdown made a successful debut at the BMW PGA Championship at Wentworth in May, producing a memorable moment as eight year old Jamie Sach stepped in as a ‘Mulligan’ to help Byeong Hun An and Jamie Redknapp on their way to victory.

This time around, the putting green at The Grove was transformed into a lively arena as a noisy crowd, including pupils from local schools who were selected as ‘Sky Sports Game Changers’, gathered to watch as Kirsty Gallacher and DJ Spoony presented the action live on Sky Sports.

Four teams, each including a European Tour professional, went head-to-head in sudden-death semi-final clashes, with each player attempting to hole putts of increasing difficulty, both in length and angle.

In the second semi-final, young Amina Monib came to the rescue of her team mates, holing a superb putt after both Chris Wood and Kevin Pietersen missed on the third hole.

She was called in to action twice more as the contest went to hole five, with Luiten and Hendry’s team eventually sealing a place in the final, where the players took part in a speed putting challenge, holing as many putts as possible against the clock.

Luiten and Hendry showed they could handle the pressure, winning 5-4 – with the help of their young Sky Sports Game Changer.

Hendry said: “I think I holed one putt out of about six or seven – not a good ratio. It was a team effort in the final and the young lad did his job well. I might need to ask him for some lessons.

“It was a pleasure to be asked to take part, and obviously to raise money for charity too. It’s brilliant to have events like this to really create a name for individual tournaments. It was fantastic to be involved in it.”