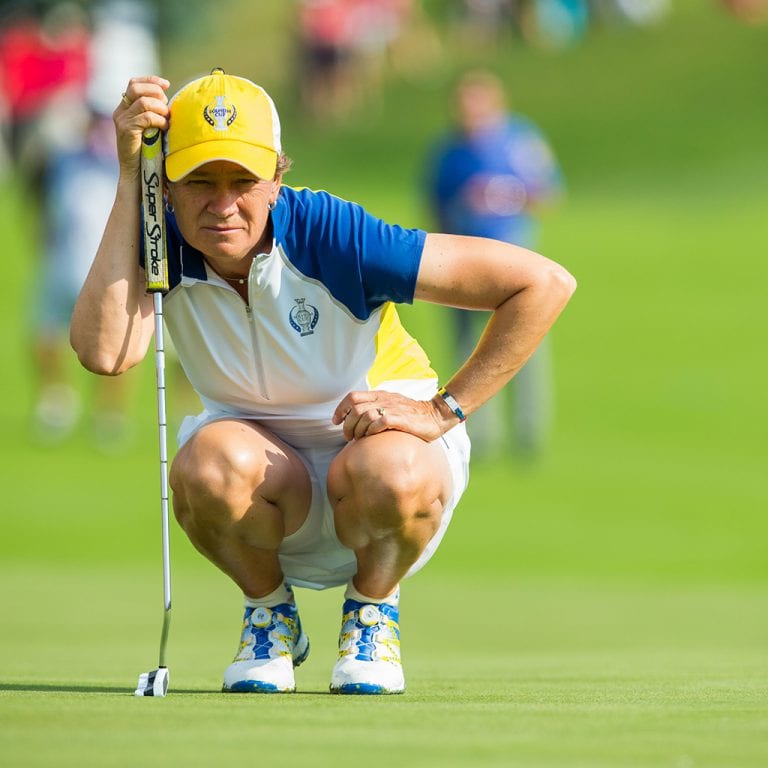 European Solheim Cup captain and Major champion Catriona Matthew has confirmed she will compete in next month’s ISPS HANDA World Invitational Men | Women, presented by Modest! Golf as a stellar field continues to gather for one of the most exciting events of the year.

Matthew is one of the most recognised women professionals in this part of the world. The 49-year-old has won events worldwide, including her greatest hour in 2009 when she secured the Women’s British Open at Royal Lytham & St Annes. She became the first player from Scotland to win a women’s Major.

The Scottish golfer has been one of the standard bearers in Europe for a number of decades and has enjoyed success competing on the main Ladies European Tour (LET) and LPGA Tour in the States. The 2019 Solheim Cup captain will be one of the major draws when she tees it up in the World Invitational at Galgorm Spa & Golf Resort and Massereene Golf Club from August 14-18.

“It will be a great time for me to compete in the new ISPS HANDA World Invitational in August and for the chance to tee it up alongside the men, especially after I announce my European Solheim Cup team the day before,” said Matthew, who will take on the Americans at Gleneagles in her home country in September 13-15.

“I have been playing tournament golf around the world all of my career and I am particularly looking forward to this new format at the World Invitational. This is a wonderful new concept and a first of its kind format in Europe.

“We have all seen how well the format has worked for the Vic Open in Australia and I am sure the World Invitational at Galgorm and Massereeene will be a great success. It is also a great addition to the schedule for the women’s game and for the chance to compete for equal prize money.

Matthew is no stranger to competing in Ireland and the North Berwick native has enjoyed much success on Irish shores. In 2011 she was part of the 2011 Solheim Cup team that defeated the Americans at Killeen Castle in County Meath. She played a starring role and was undefeated for the week with two wins and two halved matches. Matthew has played in nine Solheim Cups and been on the winning side three times.

A year later the Scot returned to the same venue, but this time to take care of business in her own right when she won the Ladies Irish Open, one of six LET titles.

“I have played many times in Ireland over the years and I am very much looking forward to getting back to Northern Ireland. I know Galgorm has a great reputation for hosting the NI Open on the European Challenge Tour for almost a decade.”

Matthew is one of many high-profile names entered to compete in the ISPS Handa World Invitational where men and women will compete for equal prize money in the $500,000 event.

“We are absolutely thrilled Catriona will play in the World Invitational. When it comes to household names in the women’s game, there are few bigger than a Major champion and current Solheim Cup captain,” enthused Niall Horan, Modest! Golf founder and Presenting Sponsor of the innovative new event.

“Catriona is one of the stars of the women’s game. She has achieved so much and has also given back to the game and it is entirely fitting she will captain the European Solheim Cup team in her home country.

“As Presenting Sponsors of the World Invitational, we are delighted Catriona will be part of this wonderful week for Irish golf where so many great players from both the men’s and women’s games will be on show,” added Horan.

Other high-profile names recently entered include the likes of American Beth Allen and Norway’s Marianne Skarpnord. Allen (37) has won three times in Europe and secured the LET Order of Merit in 2016.

High flying Skarpnord is currently third in the standings and pushing for a Solheim Cup place to take on the Americans at Gleneagles in Scotland in September. Skarpnord won the Ladies Classic – Bonville and has a number of top 10s this season. The 33-year-old is also partner to European Tour winner Richard Green from Australia and the pair are both in line to compete in the World Invitational.

In a historic year for golf Ireland with The Open set to take place at Royal Portrush next week, the ISPS Handa World Invitational just weeks later will be a unique opportunity to witness some of the best men and women players. It’s a truly innovative format, which is pioneering the way for the future of professional golf in Europe.

Tickets for the ISPS Handa World Invitational are already selling fast. Advanced ticket sales can be made at worldinvitational.golf where spectators can take advantage of the early bird offers and be part of another exceptional week for Irish golf.