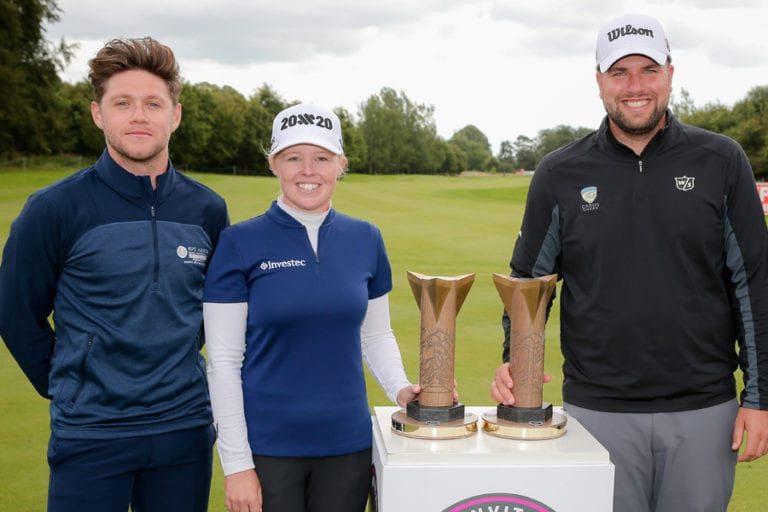 With five weeks to go until the ISPS HANDA World Invitational presented by Modest! Golf, a strong international field across the three sanctioned tours has currently entered to play in Northern Ireland from the end of July.

The ISPS HANDA World Invitational stands out as the only tri-sanctioned event in the northern hemisphere where the European Tour, LPGA Tour and Ladies European Tour (LET) have come together in an innovative and inclusive mixed event.

A total of 288 players (144 men, 144 women) will arrive at Galgorm and Massereene for tournament week from July 28 – August 1, 2021 to compete in two separate 72-hole Stroke Play events at the same time at the same venues and for equal prize money in the US$3 million event. Official Suppliers GreenAware will fittingly plant 288 trees for each player in the field as part of their support of this year’s event.

With so many players competing from the men’s and women’s game, there is genuine depth in the field; Ryder Cup players, multiple tour winners plus former Irish Open champions.

Denmark’s Søren Kjeldsen and Wales’ Jamie Donaldson are entered to play, and both know how to win on Irish soil. Kjeldsen won the 2015 Irish Open at Royal County Down, while Donaldson took the spoils at Royal Portrush in 2012 in front of record crowds.

Those with experience competing in the cauldron of pressure of the Ryder Cup are also entered, such as Victor Dubuisson (France) and the English pair of David Howell and Andy Sullivan, who have all played Ryder Cup.

When it comes to proven tour winners, Scotland’s Richie Ramsay and Stephen Gallacher may be lamenting last evening’s soccer results at the Euros, but the Scottish pair stand out on the entry list.

An international theme of tour winners on the men’s side continues with the likes of Spain’s Pablo Larrazabal or Dubuisson’s compatriots, Gregory Havret and Raphael Jacquelin. Go further afield and players such as Australia’s Scott Hend or South Africa’s Richard Sterne are also entered to play. Recent Tour winner Richard Bland from England, who made a fast start at last week’s the US Open, is also entered.

A number of these players will arrive at Mount Juliet in the coming days ahead of next week’s Dubai Duty Free Irish Open before they make scheduled returns to Ireland for the ISPS HANDA World Invitational in a few weeks.

There are so many exciting narratives on the women’s side of the draw from both the LPGA and LET Tours. Slovenia’s Ana Belac competes on the LPGA Tour in her rookie season after being crowned the 2020 Symetra Tour Player of the Year. The LET’s Lee-Anne Pace, who has won 22 professional events, recently added the Investec South African Women’s Open after winning on home soil.

There is also the exciting Jutanugarn sisters, Ariya and Moriya, from Thailand to keep an eye out for. Ariya is currently eighth on the LPGA money list with Moriya closely followed inside the top 20. Ariya is a two-time Major winner and has won 11 times on the LPGA Tour, while Moriya is also a proven winner and was Rookie of the Year in 2013.

And if marking your card for big hitters, keep an eye out for the Netherland’s Ann Van Dam or Bianca Pagdanganan from the Philippines, two players who are also entered and would complement the bit-hitting Belgian Nicolas Colsaerts in the men’s draw.

“We are delighted with how things are shaping up at this stage with five weeks to go until tournament week,” explained Gary Henry, ISPS HANDA World Invitational Event Director.

“We have some great names in both the men’s and women’s lists, who are currently entered to play.

“With players now finalising their plans after the Olympic qualifying cut-off we are starting to get a clearer picture of who will be able to join us at the end of July. We continue to work within government guidelines around COVID restrictions and plan to make some big-name announcements in the coming days and weeks as momentum builds ahead of another special tournament week here in Northern Ireland.”

Tickets for the ISPS HANDA World Invitational are currently on sale and can be purchased through the tournament’s official ticket platform EventBrite. https://www.eventbrite.co.uk/e/150314144653