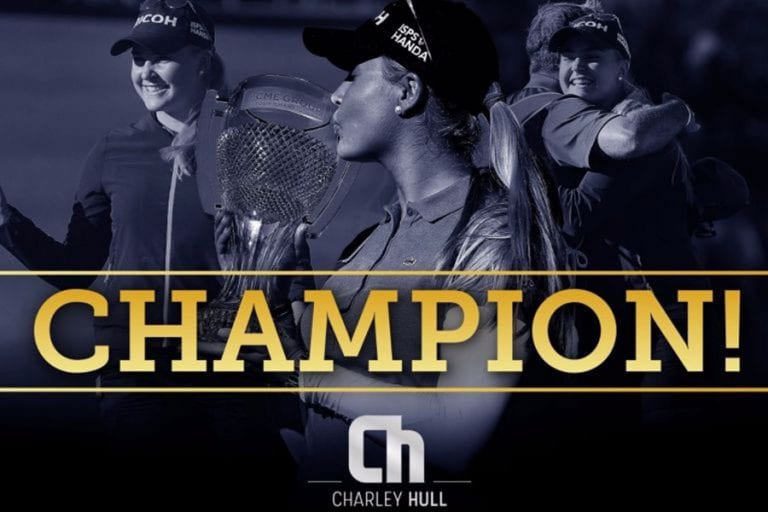 Charley Hull is now a winner on the LPGA Tour. Sunday, the 2015 rookie captured her first title on Tour at the CME Group Tour Championship by holding off playing partner So Yeon Ryu to win by two-strokes.

Hull carded a final round bogey-free, 66 to finish the week at 19-under par and set a new Tournament scoring record, previously set by Cristie Kerr at 17-under par in 2015.

“Yeah, it’s pretty cool feeling.” Hull described to the media following her win. “Hasn’t quite sunk in yet, but I last won on the LET, the European Tour, like two years ago. Had that dry like patch for a few years. Feels good now to get a win.”

Hull held a narrow 54-hole lead, one-stroke ahead of playing partners Brittany Lincicome and Ryu. She appeared nervous at the start, hitting her tee shot wayward to the right at the first hole followed by a wayward approach at the second. But as Hull began to steady herself she pulled ahead by as many as two-strokes. But Ryu kept pace, matching Hull at the par three, 16th hole to head into the final stretch tied at 18-under par. At the par 5, 17th hole Ryu’s approach rolled into the greenside bunker and up near the lip while Hull rolled hers up for an easy birdie. The two-shot swing left Ryu two-shots back heading to the final hole where she closed out her round of 67 to finish second at 17-under par for her 11th top-10 finish of 2016.

“Sometime you just — well, good thing is when you decided to do something then when you are completely having a faith about it, then when you did it you cannot really complain about result,” Ryu said about her approach to the 17th hole. “Yeah, maybe 17 was only one my decision wasn’t really great. Maybe better to hit 3-wood or draw or something like that. But just sometimes I feel like just God make that happen. You know, God make that happen for make me a better player, make me a better person. So I just really don’t want to blame myself. I just take this one as just serendipity, you know.”

The final title of the season was just one of many up for grabs at the season’s final event, where the Race to the CME Globe, Rolex Player of the Year, Vare Trophy and money title weren’t determined until Sunday’s final round.

Looking poised to sweep the season ending awards following her second round 62, Lydia Ko walked away empty handed for the first time at the season’s final event where she won the $1 million dollar prize in its first two years. Instead, world No.2 Ariya Jutanugarn will take home the prize as well as Rolex Player of the Year honors and the money title.

In Gee Chun locked up the Louise Suggs Rolex Rookie of the Year award before the season’s end with her major championship victory at the Evian Championship. She also added the Vare Trophy to her growing list of accomplishments, making a birdie at the 72nd hole to edge out Ko for the lowest scoring average of the season. She is the first player since Nancy Lopez in 1978 to win both awards in the same season.

“It was big honor for me, because to have my name next to legends, and then I play with Lydia and Amy today. (Indiscernible), and I always play with them. I know she’s great, but Lydia is great player,” Chun told the media. “I learned from her a lot.”

Win tickets to the ISPS Handa World Cup of Golf!