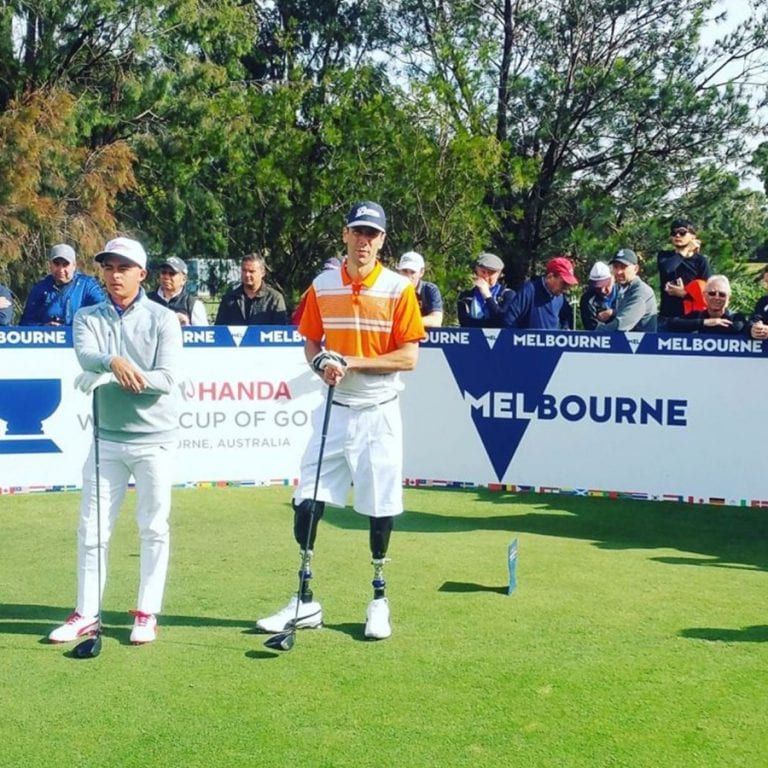 A MAN WHO is a double amputee with five per cent chance of survival has defied medical predictions to play in pro-am golf tournament alongside US star Rickie Fowler.

Mike Rolls contracted meningococcal septicaemia while he was away on a football trip at the age of 18 in September 2001. He fell terribly ill and was unconscious for five weeks. Medics in his homeland of Australia gave him a five per cent survival rate.

The infection spread throughout his body, leading to the amputation of his right leg, along with two fingers on his right hand. Mike said: “I remember the doctor coming in first time and saying, ‘Mike, you’re going to be in hospital for a very long time.’ “The very next day he came and said, ‘Mike, you’ve been very sick, you’ve contracted meningococcal septicaemia.’ And the very next day he came and said, ‘You’ve lost your right leg below the knee.’
At one point doctors told his parents he had just an hour to live. He said: “There were times in hospital when I thought I was going to die.

“The doctors gave me about a five per cent chance to live. Miraculously and with the help of some amazing people in the medical industry and also the support and nurturing of my family, I came through it.”

Mike defied the odds to survive – and eight years later volunteered to have his left leg amputated too.
“It took about eight years to make a really tough decision. I actually elected to amputate my remaining leg, my left leg,” he said

“It was dead weight I was carrying around with me. It was detracting from my happiness.

As keen teenage golfer, Mike’s love of the sport would help him get back on his feet, even though both of them were now artificial.